skip to main | skip to sidebar

No other country on the planet can show such a huge investment in internet infrastructure in just a few years.
While China boosts the largest internet population on the planet, the amount of 3G phone users is mind-boggling.   400 million hard internet users and 250 million 3G internet users!  Actually I think the number of 3G users probably extends way beyond 250 million, but anyways...these figures are mind boggling.  And the rate at which technology has swept across China is undeniably the fastest expansion of the internet thus far.  Here are some stats from today's recently published 'white paper' titled "The Internet in China"
"Thanks to government support and definite policy guidance, the Internet has been led onto a track of comprehensive, sustained and rapid development in China.
China has injected enormous sums of money into Internet infrastructure construction. From 1997 to 2009 a total of 4.3 trillion yuan was invested in this regard, building a nationwide optical communication network with a total length of 8.267 million km. Of that, 840,000 km was long-distance optical cables. By the end of 2009 Chinese basic telecommunications companies had 136 million broadband Internet access ports, and international outlet bandwidth was 866,367 Gbps, with seven land-submarine cables and 20 land cables, that had a combined capacity exceeding 1,600 Gb. That ensured Internet access to 99.3% of Chinese towns and 91.5% of villages, and broadband to 96.0% of the towns. In January 2009 the government began to issue third-generation (3G) licenses to mobile service suppliers. Today, 3G network covers almost the whole country. Along with the swift expansion of the mobile Internet, more people will benefit from this technical advance.
The construction and improvement of the Internet infrastructure has beefed up the spread and application of the Internet. By the end of 2009 the number of Chinese netizens had reached 384 million, 618 times that of 1997 and an annual increase of 31.95 million users. In addition, the Internet had reached 28.9% of the total population, higher than the world average. At the same time, there were 3.23 million websites running in China, which was 2,152 times that of 1997. The number of IPv4 addresses approached 230 million, making China the second-largest owner in the world. Of all the netizens, 346 million used broadband and 233 million used mobile phones to access the Internet. They had moved on from dialing the access numbers to broadband and mobile phones. These statistics make China among the top of the developing countries in developing and popularizing the Internet." 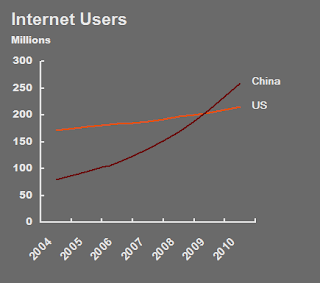 I would suggest reading through the entire white paper to see China's thoughts and policy regarding the internet as a whole and usage in China. As you can see by the chart on the left, China's usage continues to accelerate and with newly announced expansion programs that will open rural areas in China, it may not be too long before there are 600 million internet users in China.

Share
Posted by Gryphon Helicopter at 9:06 PM No comments: